Open world, open space, a space where the imagination can be free, a creative place, a cultural place. Poets and writers like Kenneth White and Norrie Bissell who work in the area of geopoetics open up these places. The International Institute of Geopoetics was founded by Kenneth White in 1989. White was born in the Gorbals in Glasgow in 1936 and raised in the West Coast of Scotland. A student of French and German, with Latin and Philosophy, White studied at Glasgow University before travelling extensively and settling in France. For me White’s writing is very familiar, embedded in the Glasgow and West Coast of Scotland that I know so well.

Quoted from the inaugural text of the International Institute of Geopoetics,

“The geopoetic project is not one more contribution to the cultural variety show, nor is it a literary school, nor is it concerned with poetry as an art of intimacy.  It is a major movement involving the very foundations of human life on earth.”

“Geopoetics is concerned, fundamentally, with a relationship to the earth and with the opening of a world.” Kenneth White, Geopoetics: place, culture, world.

As a musician and composer investigations of our relationship with the earth, how humans relate to the world are very appealing. If our creative endeavours are to be long lasting then they should have deep roots and be sensitive to the world that surrounds us. To quote Kenneth White from his book On the Atlantic Edge “a world arises from the contact between the human mind and ‘what’s out there’. When the contact, the relationship is sensitive, intelligent, subtle, you have a world in the full sense of the word. When the contact is brutal, stupid, ignorant, you have…..cacotopia”. Sensitive, intelligent, subtle, a good starting point for any creative endeavour I would suggest.

There is an attention to detail in White’s writing that inspires deeper reflection in our own creative work. This acute awareness of detail, reflection and thought is demonstrated wonderfully in this excerpt XXII from the Kenneth White poem “Walking the Coast”

the rosy quartz-
there in loose pieces
on the beach of Coll
in granite belts
on the north shore of Loch Eatharna
and in gneiss
at Poolewe Glen Logan and Rona:
an image of the soul
when it emerges at last
from the magma originaria
and through the conflcts –
an idea of earth

Similar specifics of detail are also found in the White poem, Midnight on Atlantic Quay, which is a bit closer to home for me.

In the world there is fog
and rain
and mud
and grease
and stench
that’s the cargo that Glasgow
unloads on my mind
and tonight it’s all there:
the fog
the rain
the mud
the grease
the stench
while I improvise a lonely blues
to which the boats contribute
boat that comes up the river
boat that goes down the river
fog-horns in action
the one sounding: glas
the other: gow
as through the city
were blowing trombone
ready to jazz with the sea 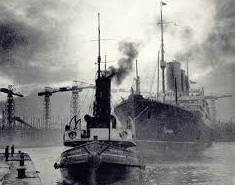 Full of humour and wisdom the writers working within the school of Geopoetics inspire creative thought for which there has to be space. White talks of ” ‘giving yourself a real beginning’ – that is, enter into a large, uncoded space, in order to attain to a greater dimension of one’s-self and, ispso facto, to a greater work field”.  He goes onto talk of not “going back to myth, metaphysics or religion” and going “beyond personal poetry and social poetry and linguistic poetry” into what he calls ” ‘world poetry’, poetry concerned with the world, that is, what emerges from the contract between human mind and the matter energy of the universe” (Kenneth White, 2003: xxvi, Open World: the Collected Poems 1960-2000). With geopoetics White has laid the foundations, a place for his and others creative endeavours, a space for cultural exploration.

“if projects are going to be something other than politically blinkered or culturally half-baked, they need to have a broad basis – as broad a basis as possible, but at the same time be sharp with specifics, making for a landing field liable to inspire interesting take-offs and long-lasting flights” (Kenneth White: On the Atlantic Edge: 24)

It’s from such a landing field that I’m building a new collaborative project.  When collaborating with other musicians it’s the ability of the collaborators to be able to relate to the essence of a piece while at the same time bringing and sharing their own personal experience and musical language that makes for rewarding projects. If a space can be created that allows for open and honest dialogue then successful projects are more like to achieved. How do we create these open spaces ? How can we structure composition so that there is space for all of the contributors to be heard ?  How prescriptive would such a structure be, how open would it be ? I’m at the early stages of planning but one thing is for sure, I will strive to design a sensitive, intelligent and subtle process…..the alternative is unthinkable !